I’m sure Jason Whittaker has already posted a similar article, but I thought it would be interesting to outline some of what I consider to be the books that had the most influence on how I study Blake. I did this a few years ago on the NASSR listserv, but these lists are always changing. These are in no particular order.

1. Blake: Prophet Against Empire by David Erdman (1954). I still consider this to be the most impressive and comprehensive

historical intoduction to Blake’s time. Not only does Erdman’s text feature as an introduction to historicist approaches to Blake, it also contains several of Blake’s own often complicated reflections on the writing of history.

2. Dangerous Enthusiasm: William Blake and the Culture of Radicalism in the 1790s by Jon Mee (1995). Mee’s historical introduction to religious enthusiasm and radical politics in the 1790s contains one of the two best accounts of the bourgeoisie revolutions of the late eighteenth century and the enthusiasts, proto-Marxists and religious prophets who wanted to use these revolutions to bring about a New Jerusalem. Mee’s study also includes an amazing section on the radical antiquarian scholar Joseph Ritson.

3. William Blake and the Impossible History of the 1790s by Saree Makdisi (2003). Makdisi’s prose is

intoxicating in this book as he attempts, and largely succeeds, to open Blake studies to philosophers as diverse as Spinoza, Deleuze and Guattari and Michael Hardt and Antonio Negri. While this book has been criticized by several academics as too naive in his supposition that Blake avoids Orientalism and Anglocentrism, Makdisi’s invocation of “impossible history” adds an indispensable nuance to earlier versions of historicist and formalist criticism by showing how these competing strands can work together.

4. Visionary Physics: Blake’s Response to Newton by Donald Ault (1968). Ault weaves a spectacularly nuanced approach to Blake’s rejection of Newton, suggesting that the prevailing assumption that Blake reacted negatively to Newton’s form of materialism is wrong-headed. Ault’s focus on close-reading is unmatched by any Blake scholar from the past or present and, in fact, forms the center of his follow-up Narrative Unbound Re-Visioning Blake’s The Four Zoas (1987). Visionary Physics is particularly important for Romanticists or Blake scholars interested in science studies.

5. Blake and the Idea of the Book by Joseph Viscomi (1993). Viscomi’s mammoth meditation on Blake’s contributions to the history of the book and material culture is an enormously detailed analysis of print methods and copper etching. With this book, Viscomi basically creates an entirely new field for Blake studies that is enormously active today. One of Viscomi’s most controversial argument is his suggestion that the multiple copies of Blake’s illuminated books were produced years apart from one another. He, thus, suggests that arguments focusing on differences between the copies are not that meaningful.

6. The Rhetoric of Romantic Prophecy by Ian Balfour (2002). Balfour spends only one chapter on William Blake, but he

develops a theory of Romantic prophecy that is essential to anyone interested in Blake’s prophetic work. Balfour’s analysis intertwines arguments about prophecy from Walter Benjamin, Maurice Blanchot and Karl Marx with historical articulations of prophetic work from the Romantic period. His chapter on Blake powerfully questions the connection between the self-image of Blake as an isolated prophet in the wilderness and historicist attempts to place him within a tradition. He concludes by theorizing the mediated nature of prophecy that instead of emphasizing isolation and immediate inspiration, focuses on community and revision.

7. Digital Designs on Blake edited by Ron Broglio (2005). This collection, part of Romantic Circles’ Praxis Series, emphasizes Blake’s relationship to New Media. Broglio presents a unique collection of academics and media artists. Articles include projects on Blakean MOOs, digital installations, Macromedia Flash programs, and video games. Broglio’s collection is one of the first works to suggest that new media installations can have dramatic effects on how we read and 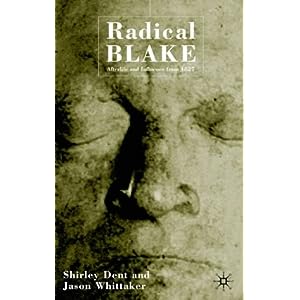 8. Radical Blake: Influence and Afterlife from 1827 by Shirley Dent and Jason Whittaker (2002). Dent and Whittaker present a remarkable survey of artists, musicians, novelists, poets and other thinkers inspired by or adapting Blake’s work and life. Of special interest is the chapter on “Metropolitan Blake,” which connects Blake’s work to the psychogeographical movement of the nineteenth and twentieth centuries.

9. Blake’s Composite Art: A Study of the Illuminated Poetry by W.J.T. Mitchell (1983). Mitchell’s text is particularly influential for its suggestion that Blake’s art forms a dialectic between word and image. Instead of suggesting that the illuminations provide illustration for Blake’s poetry, Mitchel argues that word and image are constantly creating tensions, complementing contradicting, and slipping past one another. Mitchell calls for a “double-literacy” in words and images when confronting Blake’s work, and thus lays the groundwork for the increasingly multimodal demands of appreciating William Blake.

10. William Blake and the Body by Tristanne Connolly (2002). Connolly’s innovative book traces the medical and anatomical texts read by Blake to create a stunning account of the transformation of identity and bodily corporeality in Blake’s work. She also reads these texts in light of the work of Julia Kristeva, creating connections between semiotics and theories of embodiment.

This site uses Akismet to reduce spam. Learn how your comment data is processed.